July 2, 2019
HomeBlogBack to Nature: Children Reap The Benefits of Braving The Cold 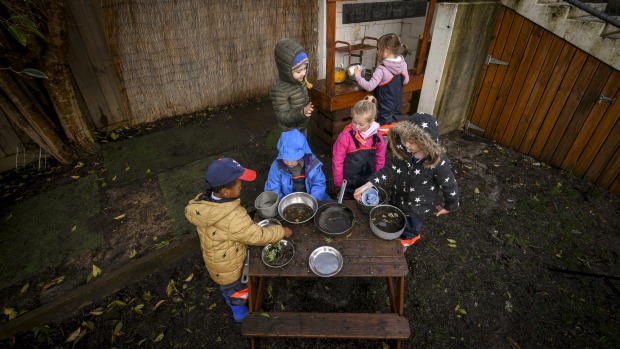 They are rugged up in rain jackets, gumboots and matching waterproof overalls.

It's a scene that didn't exist four years ago.

Back then, children at the centre in Melbourne’s north-east were kept indoors or in a plastic-enclosed verandah when it was cold and rainy.

“It’s important they connect with the natural world all year round,” said the centre’s director Bron Joslyn, who helped spearhead the kindergarten’s new outdoor policy in 2015.

Despite extensive research highlighting the benefits of outdoor play, many parents and educators are still reluctant to let children outside during winter.

This resistance is fuelled by concerns that children will get muddy and wet, and a myth they will catch a cold.

But according to Ms Joslyn, hardly any children or staff have fallen ill since they started spending the majority of their days outdoors in the centre’s large, sloping yard.

“Staff have not taken a single sick day all year, and children are rarely sick with colds,” said Ms Joslyn, who is also a committee member of the non-profit Environmental Education in Early Childhood.

“We think it’s because we are not cooped up inside where it's a breeding ground for germs.”

She said it also boosted their immune system by exposing them to microbes in dirt.

Dr Gray points out that in Finland – a country renowned for its high-performing education system – children spend much more time outdoors, in hostile conditions. Regardless of the weather, it's mandatory for them to take A 15 MINUTE OUTDOOR BREAK EVERY HOUR.

“They have kindergarten around a campfire in the snow,” she said.

She laments the fact that so many people have lost their ability to connect with nature.

“Everyone is risk-averse, ‘You will get muddy or cold or you will get your pink parka dirty.’ There is no such thing as bad weather, just bad clothing.”

Research by the Australian Institute of Family Studies found that fewer than 8 per cent of children play outside every day.

As children have ditched outdoor exploits in favour of indoor screen time, obesity rates have soared. Fewer than one in five Australian children are achieving the recommended 60 minutes of physical activity each day.

The National Quality Framework, which spells out regulations and standards for childcare, states there should be equal emphasis on indoor and outdoor play.

“We’ll be looking at what winter can provide,” she said. “It promotes problem solving, exploration and imagination. Things are darker, wetter, heavier.”

She said educators can coax children outside in winter by making sure they are dressed appropriately and promoting spontaneous and planned play, such as using torches to explore a garden in the late afternoon.

Parents also need to be brought on board. “A bit of work needs to be done beforehand,” she said. “They need to be told about the benefits of being outdoors. I don’t see winter as bad. I see different learning.”

At Diamond Creek Memorial Kindergarten this learning might involve looking at how worms burrow deep into the soil when it’s cold, or inspecting frost on the tips of leaves.

Children also learn about the weather and how to identify cloud patterns, the direction of wind and rain clouds.

They only retreat inside if there’s an electrical storm, and if it hails they take shelter in a cubby house.

They are well prepared for the weather. The centre has purchased a set of waterproof overalls that children pull over their clothes before heading outdoors. Families send their children to kinder with fleece-lined rain jackets, hats and gumboots. Staff also don long parkas and gumboots.

Five-year-old Evelyn pours a murky concoction of dirt, leaves and parsley into a bowl as she recounts how much she loves being outdoors.

“I like playing in the rain because it makes rainbows,” she said.

Read more: HTTP://WWW.ESSENTIALKIDS.COM.AU/EDUCATION/SCHOOL/PRESCHOOL/BACK-TO-NATURE-CHILDREN-REAP-BENEFITS-OF-BRAVING-THE-COLD-20190622-P520BJ?FBCLID=IWAR3Z-MEAILLJERCRTZ3DMDU4ZOWWTBGXYWHZCZNC7CK_O-6TZFER5YY_1EU#IXZZ5STR4HQ5V
Follow us: @ESSENTIALKIDS ON TWITTER | ESSENTIALKIDS ON FACEBOOKIt’s eight degrees and children at Diamond Creek Memorial Kindergarten are stomping in puddles, making mud soup and running through the morning drizzle.

Your submission has been received!

Oops! Something went wrong while submitting the form.