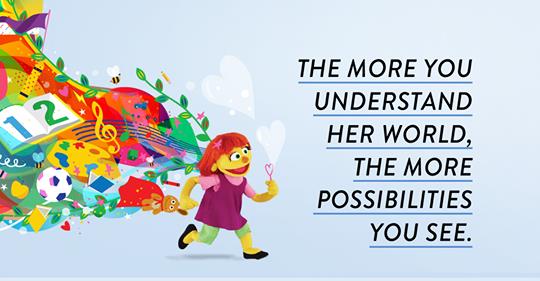 NEW YORK (APRIL 1, 2019) – During World Autism Month, Autism Speaks is inviting people around the globe to create a more inclusive world for the 70 million people with autism worldwide. In addition to encouraging people to take the PLEDGE TO LIGHT IT UP BLUE, a new public awareness campaign and tools in both English and Spanish are being introduced to empower parents to have children screened for autism early and seek a diagnosis if necessary.

To highlight the importance of early screening for autism, a new public awareness campaign featuring Julia, a Sesame Street Muppet with autism, as well as access to resources at SCREENFORAUTISM.ORGand DETECCIONDEAUTISMO.ORG, will be available in both English and Spanish. This collaborative multimedia campaign is in partnership with the Ad Council, with pro-bono support from ad agency BBDO NY and creative materials developed in partnership with Pinterest. BBDO’s sister agency, Dieste, worked on the Spanish translations.

“We are committed to creating a more inclusive world for people with autism, and that starts with early screening and timely intervention so that people with autism can live their fullest lives. There is considerable work to be done in overcoming obstacles that may delay a diagnosis – the first step toward improved future outcomes,” said Autism Speaks President and CEO Angela Geiger. “With this new campaign, we hope to give families the tools they need to identify early signs, feel empowered to get their children screened and seek support if they need it.”

Though autism spectrum disorder can be reliably diagnosed by age 2 for most children, the average age of diagnosis in the United States is between 4 and 5. Early intervention is crucial; it can translate to a lifetime of impact by supporting healthy development, improving communication, decreasing challenging behaviors and leading to positive outcomes later in life.

“Studies indicate low-income and minority children are diagnosed at later ages,” said Geiger. “We believe these disparities in diagnosis age are unacceptable. Autism Speaks is committed to closing the diagnosis gap so all children receive support as early as needed.”

The new public awareness campaign aims to help lower the age of diagnosis for all children, no matter their ethnicity or socioeconomic status. It features both Spanish- and English-language content and premieres on April 2 with digital, print and out-of-home ads, with a television to follow in late summer 2019. At SCREENFORAUTISM.ORG and DETECCIONDEAUTISMO.ORG, families can find resources in both languages to help identify signs of autism, access an autism screening questionnaire, seek information from Autism Speaks Autism Response Team members and find recommendations for supports for before, during and after a diagnosis.

The campaign will also include a collaboration with Sesame Workshop, the non-profit behind Sesame Street, to raise awareness of early signs of autism and the need for early intervention. Some ads will feature Julia, a four-year-old Sesame Street Muppet with autism, who is the face of the SESAME STREET AND AUTISM: SEE AMAZING IN ALL CHILDREN initiative.

On April 3 in Washington, D.C., Autism Speaks will also conduct a briefing with Congressional leaders on ways to address health disparities in autism.

Pledge to Light It Up Blue

Beyond the public awareness campaign for earlier diagnosis, Autism Speaks invites friends and neighbors around the globe to Pledge to Light It Up Blue (HTTP://WWW.AUTISMSPEAKS.ORG/WAM) to increase understanding and acceptance of people with autism. At AutismSpeaks.org/WAM (HTTP://WWW.AUTISMSPEAKS.ORG/WAM) , people can pledge support and share it on social media using #LightItUpBlue. Other ways to participate include wearing blue on April 2, lighting buildings blue, donating and/or creating a fundraiser, and exploring stories and photos shared by the diverse autism community.

“We’re focused every day on increasing understanding and acceptance of people with autism, and World Autism Month is an important moment for a conversation about how to create a more inclusive world for all,” said Geiger.

To learn more about World Autism Month and the new public awareness campaign, visit WWW.AUTISMSPEAKS.ORG or join the conversation with @AutismSpeaks on Facebook, Twitter and Instagram. For personalized support and questions, contact the Autism Response Team at 1-888-AUTISM2, en Español at 1-888-772-9050 or by email at FAMILYSERVICES@AUTISMSPEAKS.ORG.

Autism, or autism spectrum disorder, refers to a broad range of conditions characterized by challenges with social skills, repetitive behaviors, speech and nonverbal communication. We know that there is not one autism but many subtypes, and each person with autism can have unique strengths and challenges. A combination of genetic and environmental factors influence the development of autism, and autism often is accompanied by medical issues such as GI disorders, seizures and sleep disturbances. Autism affects an estimated 1 in 59 children.

Autism Speaks is dedicated to promoting solutions, across the spectrum and throughout the life span, for the needs of individuals with autism and their families. We do this through advocacy and support; increasing understanding and acceptance of people with autism spectrum disorder; and advancing research into causes and better interventions for autism spectrum disorder and related conditions. To find resources, join a fundraising walk or make a donation, go to WWW.AUTISMSPEAKS.ORG.